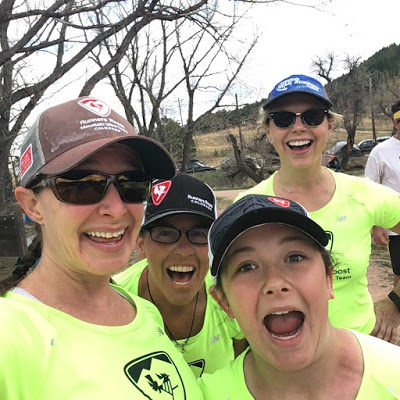 I started running later in life. I had always been active when I was younger, specifically, as a competitive gymnast for over a decade. After high school, that level of activity disappeared. I packed on the pounds in college, and by the time I was in my mid twenties, was probably 50 pounds overweight. To combat the weight gain, I joined a gym. Running never crossed my mind. I’d walk on the treadmill and glance with envy at the fit folks who could run with ease for an hour at a time. That would never be me, I determined. I was, however, obsessed with that little number on the treadmill. You know the one – the one that tells you how many calories you’ve burned. I had pretty much maxed out how fast I could walk, so if I wanted to lose more weight, I was going to have to start running – for more calorie burn. I can absolutely remember the first time I ran an entire mile without stopping (something I could never even do as a kid). I called a handful of people, all who were fairly unimpressed with my “monumental” feat. But it lit a little spark in me. In the beginning I never had mileage goals, per se, more like, I have 45 minutes, how far can I run in that amount of time?

I had hit my goal weight after just a year of diet and exercise. I figured that would be the “happy ending/beginning” for the rest of my life. Spoiler – it was not. My husband of nearly five years was unimpressed with my lifestyle change. There was a lot of arguing and distrust – obviously I was only losing weight because I was cheating on him, right? I refused to be bullied into quitting something that made me feel good, and continued going to the gym on a regular basis. Then, in December of 2004, I woke up in the middle of the night with the most intense back pain I had ever felt. I had my husband rush me to the emergency room and after being admitted and having numerous tests and MRIs run, I found out what was wrong with me. I didn’t believe it, but immediately made a follow-up appointment with a neurologist.

Multiple Sclerosis. Relapsing-Remitting Multiple Sclerosis. Lesions on my spine. Even now, it gives me the chills to write. After speaking with my neurologist, I was able to think back and pinpoint other signs that something wasn’t right. The numbness. Tingling. Feelings of constriction, even when nothing was touching me. We discussed treatment options. TREATMENTS I WOULD HAVE TO TAKE FOR THE REST OF MY LIFE.

I wasn’t ready for this. And it wasn’t fair. Granted, I hadn’t always made the best life choices, but after having worked so hard for the last year, it felt like the rug was being pulled out from under me. The first step was an infusion of IV steroids to combat the relapse. We discussed which medications I thought I might be able to live with. Tysabri was brand new on the market, still fairly experimental, but what I was leaning toward because it seemed like it would disrupt my life the least – monthly infusions versus a daily pill or injection. 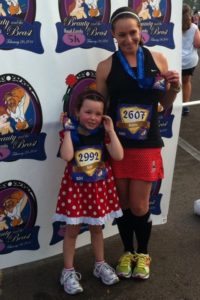 And then the REAL catalyst – I found out I was pregnant in March 2005. Considering even cold medicines aren’t recommended while pregnant, I opted to wait on a full-scale treatment option and take my chances with the MS symptoms.

All that hard work I’d done to lose weight? Out the window. My heart rate got too high when exercising, so I couldn’t work out – at all. I gained over EIGHTY POUNDS when I was pregnant, tipping the scales at over 200 pounds. That’s a lot of weight on a five foot tall woman! Luckily, there were no complications during the pregnancy, and Ariel was born a week late in November 2005.

Determined to lose the weight (AGAIN?!) and try to combat MS, I was back in the gym within a month. My husband was still not on board with me exercising and would not “babysit” so I could go to the gym. That meant the only time I could get a run in was if I got to the gym right when it opened at 5 am while he was still asleep.

After years of being in an extremely tumultuous and unhealthy relationship, I finally had the courage to leave. I filed for divorce in June 2008.

After that, running definitely became a form of therapy – I could run away from all the stress of my life, and my “new” diet and lifestyle (including the lack of stress from living with a toxic spouse) seemed to be keeping my MS in remission.

I had run my first race in 2007, the Bolder Boulder. (Which I very clearly remember saying, why would I want to pay to run, I run for free all the time). While I enjoyed that run, I was not yet quite “hooked” on racing. That didn’t happen until 2010 when I ran my first half marathon – the Canyonlands half marathon in Moab. Maybe it was the combination of achieving something that seemed downright impossible (did you know a half marathon is THIRTEEN POINT ONE MILES??) or maybe it was the enjoyment of running somewhere other than my local bike path. But the “spark” of running and traveling was ignited. 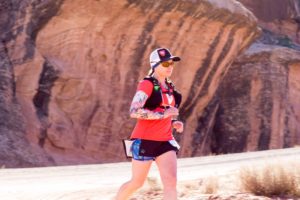 I spent the next few years traveling to every state in the country and running a half marathon in each and every one. I delved into the crazy world of marathons (but I’ll just run one! And if I just run one, I should run somewhere cool! Like… Greece!) to the even crazier world of ultra marathons – maybe I’ll just run ONE 50K. Errr, 50 miler, ok, maybe just ONE 100 mile run, and then that’s it.

But that was “just the beginning.”

It’s hard to talk about my “why” and history of running without including my daughter, Ariel. The “Walker girls” have been a team for over a decade now. Before Ariel could run, we went on walks and short hikes. She was either three or four when she first started asking to run with me. Secretly overjoyed, I loved that she wanted to join me, but I also wanted to be sure running was something that she actually wanted to do, not just because *I* wanted her to. We had a few fun one mile loops we would run together, and then when she was five, she ran her first 5K – a fun run at Disney World. I think it’s safe to say that from that point on, she was also hooked.

The natural progression of our running seemed to be finding other people to run with. That’s how I first discovered Runners Roost in 2012. I remember heading to the store in Louisville on a Saturday morning after I DNF’d at my first 100 mile run, hoping I’d find a group to run with on weekends. Little did I know that I would not only find people to run with on weekends, but there were also run clubs during the week! Over time I eventually started running with the Denver store – bringing Ariel along with her bike, or to join for a short run. For many years, that was our Wednesday tradition. In 2017, we gradually relocated to running the trails in Boulder. (Such a bummer the two stores run the same night!) 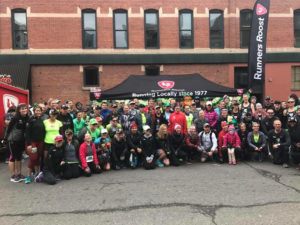 The support and “family” we had both been missing over the years was found in the running community. For the last five years (three for Ariel!) we have been proudly representing Runners Roost – on the roads, in our training group with Runners Edge of the Rockies and on the trails. We run locally, and we run in places like the the woods of Michigan or the trails in Scotland.

Running has kept my MS relapses to a minimum (I’ve been blessed to have only had a handful of episodes in the last 10+ years). I know there will be a day that I won’t be able to run like I’m currently able to. My pace has already slowed quite a bit and I have episodes where everything seizes up and I struggle to get through even an “easy” training run. But I’m still out there, doing what I love – because I can.

We run roads. We run trails. We run alone and with friends. We volunteer. And sometimes, we even put on races. Despite what many think – running is NOT a solo sport. It is coming together as a community. Ariel is now thirteen (how did that happen) and I’m certainly no longer in my twenties, but we continue to do what we enjoy. We are so grateful to have met so many people through running . Happy trails! 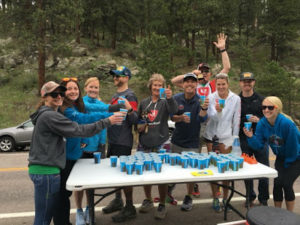 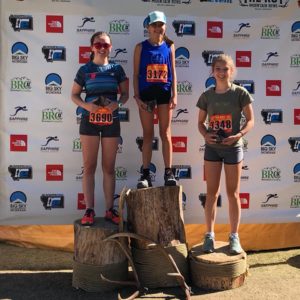 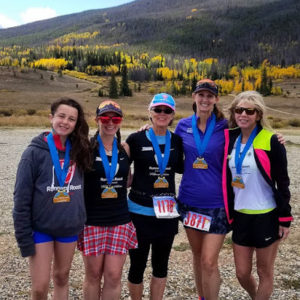