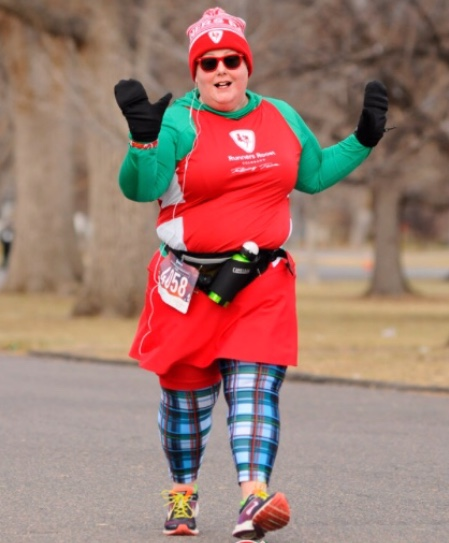 The story of how I became a runner begins with pain. We all have pain in our lives, sometimes we get to choose our pain – and other times we are left to endure things that happen to us instead of because of us. I was five years old when my father died, and seven when I learned that he’d committed suicide. Growing up I couldn’t help but think that my Dad simply didn’t love me enough to fight harder to stick around.

By fourth grade I was noticeably overweight, and, as a result, suffered all the typical ‘fat kid’ problems at school. I was teased incessantly for being huge, wearing glasses, and having red hair. I was horrible at EVERY sport – especially running! By Junior High the rest of the class was forced to wait on blazing hot metal bleachers as I did my best to waddle through my four laps despite painful chafing – where was Body Glide when I needed it? And why were our gym shorts so, horribly, short? The insults and physical pain finally became too much. I begged my Mom to take me to the doctor, and then, begged my family physician to write a note to get me out of P.E. A few pen strokes was all it took to end a whole lot of pain!

I continued to exercise into adulthood though, because, after all, I was overweight and inactivity would only make matters worse. I did step aerobics, joined gyms and worked out on machines, lifted weights, and even got up and walked 4-6 miles a day while eating what I felt was a healthy diet. Sadly, no matter what I did, no matter what I ate (or didn’t eat) I remained overweight. And I did resort to some pretty hard core stuff, because being overweight is painful, including following a low carb diet which resulted in even more painful kidney stones. My weight also made me infertile and in order to keep my pregnancies viable I had to be placed on hormones… Doctors seemed to feel that the solution to my weight problems would be even more hormones but with that came some pretty scary risks. I opted not to keep messing with what was already a delicate balance… Imbalance? I had two daughters and decided to accept my fate.

I probably never would’ve become a runner at all had I not fallen on wet leaves hidden beneath two feet of snow near the stairway of my building in the fall of 2009. My knees popped. Both of them. It was a pop followed by a crunching sound. The pain was excruciating and I couldn’t stand back up. I was afraid to go to the doctor because I knew what I’d hear, “Every extra pound of weight you carry is another four pounds of pressure on your joints.” For months afterwards the pain continued and so I walked as little as possible and only stood up if absolutely necessary.

After six months I finally caved and went to get x-rays and an evaluation. The doctor was confident that there was no permanent damage but he said that if I didn’t get back on my feet soon it might result in permanent disability. So what’s more painful? Walking on weak knees at nearly 300 pounds? Or being confined to a motorized chair because I didn’t put up a fight? I thought of my Dad… How he gave up. And then I thought of my daughters and how I owed them so much more than that!

I joined a gym that was open twenty four hours a day because, as a one car family, I could only manage to go when my husband was home from work and could stay with the girls. Therefore, I worked out at the craziest hours – which was great, in a way, because I often had that entire gym to myself. After more than a year I’d gotten stronger and had lost about 60 pounds (or about 240 pounds of pressure off my knees). But, during that same year, my mother’s health started to decline rapidly. My mom is also overweight, has high blood pressure, type two diabetes, and high cholesterol. I knew I didn’t want to share that same fate so my focus shifted – I didn’t just need to exercise – I needed to change every lifestyle factor I could to be as healthy as possible. I read, researched, and watched documentaries. I began eating a whole food, plant based diet in order to reduce my risk for heart attacks and strokes – I wasn’t about to take a whole slew of medicines with even more side effects if I could simply switch my diet instead.

During those late nights at the gym I’d sometimes see this guy come in and run on the treadmill who had “26.2” tattooed on his ankle. When he ran he looked like he was at peace, like he was flying. He was not in pain. After a while, I started to try to run. I couldn’t manage more than about 30 seconds at a time – but those were thirty amazing seconds! The more I ran the more I got hooked. I’d play around with the treadmill settings, “How long can I run at 6 miles per hour!?! 8? What about that incline?”

And then I got this insane idea, “I should run a half marathon!” I say “insane” because at the time I couldn’t even complete a single mile without stopping to walk. I had no idea how to train for a half marathon, but I knew I wanted that to be my goal so I began reading and researching AFTER I signed up for one. Happily I found John Bingham’s The Accidental Athlete at the library and I was more inspired than ever to get out there and become a “runner.” I ran/walked around Sloan’s lake (which I thought was about 3 miles (it’s actually more like 2.6)) whenever my husband could stay home with the kids and kept working out at night at the gym. I toed the starting line of my first half marathon in October of 2012 – Denver’s Rock n Roll – my first race ever! I didn’t realize at the time, not having a GPS watch (and being so excited just to be out there) that I’d been re-routed and had not completed the full 13.1 miles – it was probably more like eleven miles and change… I mistakenly thought that I’d finally lost that sag wagon that’d been tailing me since I came out of the Porto-Potty near the Pepsi Center! At the finish line, through the barricades, I buried my face tearfully into my husband’s shoulder. I had finished. I was in pain but I had finished. I went from being unable to walk to crossing the finish line at a big race. 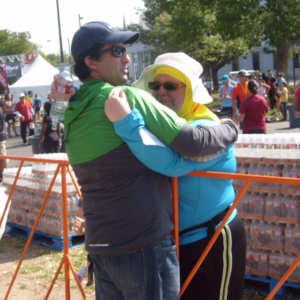 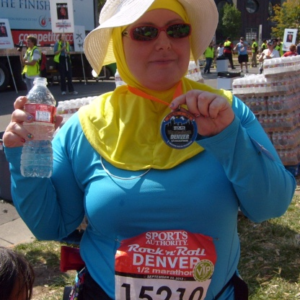 It took me quite a while before I had the courage to actually think of myself as a runner… But in 2014 I did something life changing and completely out of my comfort zone – I joined a Run Club. The Belmar Running Club quickly became an integral part of my weekly routine and something I looked forward to every Thursday even though I attended with my daughters and often had to walk, not run. The supportive Run Club community included several members of the Runners Roost Race Team including Josephine who fast became my personal running enabler by texting me discount codes and encouraging me to sign up for races she’d be running too! Eventually Josephine also encouraged me to apply for the Runners Roost Race Team… 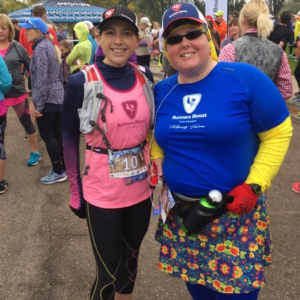 If anyone had told me ten years ago that I’d be an ambassador for the Runners Roost Racing Team or that I’d run as many as 54 races in a year (my total for 2018), or that I’d be the Vice President of the Rocky Mountain Road Runners – I wouldn’t have believed it. Me? A Runner? Me? A sponsored athlete? What? I’m the girl who couldn’t wait to get out of running… I’m the girl who everyone made fun of while she tried to complete a mile…

It’s safe to say that running (and the running community) has completely changed my life. I’ve met people who understand, on a very deep, meaningful level how important moving forward is to me – no matter how slowly I may be going or how painful each step may be! I decided to consciously choose my pain. To persevere instead of quit. And that choice has made all the difference.