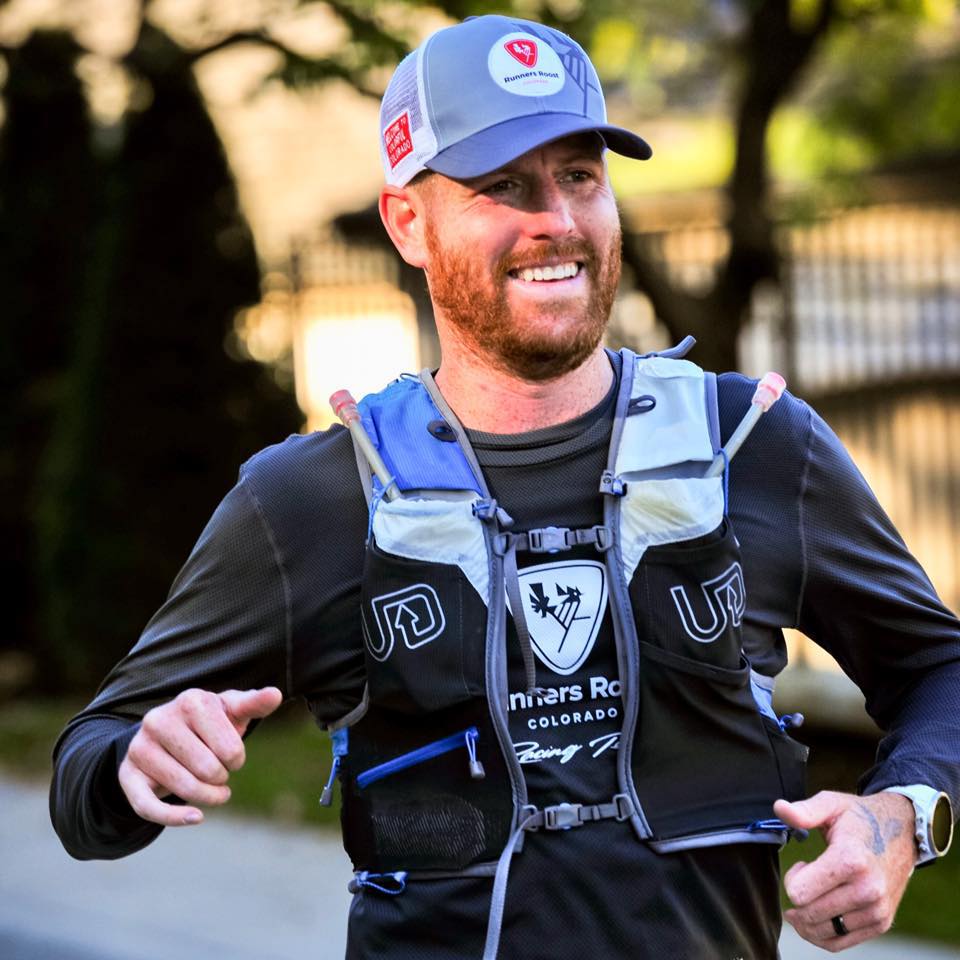 “Bid me run, and I will thrive with things impossible.” – William Shakespeare

It was dusk on a known trail system near home. I was on a run, grazing earth that I’d touched many times before. A few miles into the journey, the focus began to lazily hemorrhage out of me.

My shoes felt anchored somehow to the gritty floor and were chewing clumps of gravel like wet, sticky gum. I was short of breath. Somewhere out there in the quiet, my shoe clipped an object unseen. Gravity, with a hand on shaky balance, jerked me down. The clumsiness left me scraped and embarrassed.

I was without a headlamp, gloves, and any awareness for my own safety. Something worse, however, was present. Drugs and booze, like gooey syrup, was stuck thick in my blood. I was high, drunk, and disoriented. It was time to collect myself and stumble home.

Sports consumed me growing up, but I was never a runner. Running was considered another sport’s punishment and it always felt like discipline. When I got to college, I quit sports altogether, waved goodbye to the active kid in me, and instead took up a drinking habit. Over the next several years, my grizzled love affair with substance abuse would slowly fester. But, as quickly as my habits took hold, running had embarked on its own vital quest to unshackle me from the mess.

In 2009, after nearly a decade as a couple, I made the hard and healthy decision to cease the long-term relationship. It was emotionally toxic. Love and a possible future for us was stifled and choked out by years of bad habits. Addiction had infected us both and I craved some slice of betterment. 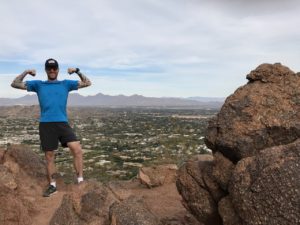 In the wake of separation and crippling loneliness, I found running. The treadmill was cloaked in broad daylight, behind a closed door. It was unplugged and asleep with a window seat to the backyard. I decided to wake it up and start doing easy workouts just to get my body moving. Cheap wooden speakers bounced techno music around the walls. The room swelled with heat. It felt good to burn.

When my mom registered us both for a local 5k, I was privately courting my addiction. It hung on me like a rabid animal – a needy beast that wrapped around me like a starving snake. It was that 5k that would pacify the addictive squeeze. The run was a release. The crowd was electric and I thirsted for more of the buzz. As soon as I crossed the tape, I was back at home and signing up for another. My collection of race bibs started to build. I was doing easy runs here and there, just to push through the work week. Competitive racing and distance running would later follow, but I needed to find bravery first. To locate such guts, I had to step into the labyrinth of my addiction and gradually set free the runner inside. Finding the exit of the maze wouldn’t be as simple as it was for me to open the door and walk right in. 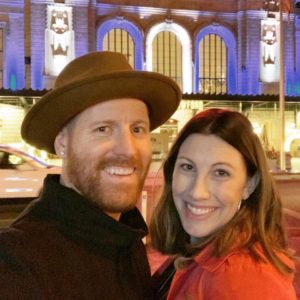 In 2011, I met my future wife. I was anxious and neck deep in bad habits, but she made the loneliness I felt go away. She was my best friend from the very beginning. For a while, my emotions were all over the place. I was unreliable and constantly broke plans. She stuck with me, while my addiction bubbled beneath the surface. Hiding my problem was like lying to the world that I was okay. I buried the addiction down where others couldn’t see it, but kept it close enough for me to feel it on my skin.

The 2012 Platte River Half Marathon was 13.1 miles of slow grit. I’d never run that far before. It was the race that got me to fall in love with running. It was also an event that would subconsciously set fire to my spin toward rock bottom. It was heart-pumping shove toward eventual and necessary change.

For a long time, I bumbled along in a state of controlled chaos. I’d rip shots then go for a run. I’d do drugs, then go on weird scavenger hunts around the neighborhood. Day after day, my hangovers were nursed by more drinking. Drug use had skyrocketed and I was stuck in a constant pull between inebriation and acting natural. Panic attacks sprung on the days I stayed clean. I was unraveling.

I was hungover on my wedding day. It was May 2015, on the grandest day of my life, and I was battered from the night before. But the day was perfect and beautiful. My wife had all of my attention. I barely glanced at a cocktail all night. I was sober, and our celebration was perfect.

After the honeymoon, my running slowed down and my addiction picked up. I was hiding booze all over the house and using drugs behind my wife’s back. Driving home from work some days, I’d pull over and vomit. I would wake up in the morning already knowing I’d be hungover the next day. Nothing stopped me from using.

When we put our dog down that August, the heavy loss fractured me from the inside out. Coming home to his empty presence was heart wrenching. Gathering up his toys and bedding had me broken. I felt hopeless.

One early evening in September, my wife called. She was out of town for work that week, and I was home alone. She was checking in on me, and would later admit that it worried her to leave me by myself during that time. I was drunk when I answered the phone. In my head, my words were clear. In reality, speech was slurred and my stories went around in circles. I was a junkie, submerged in an intoxicated, drug-twisted rabbit hole. This was no way to live. I sipped my last whiskey and coke, not knowing that tomorrow would bring an awakening.

On September 11, 2015, I unmasked my addiction. I was so tired of feeling like trash. I told my wife that I was done drinking, and also had long been hiding a drug dependence. The latter made her question who I was. There was silence between us. For a moment, I was terrified that she’d leave me. Telling my parents was a separate intervention. Coming clean to them wasn’t as scary, but was crucial to the early stages of my sobriety. My admission was powerful and would bring us all closer together.

The first six months of sobriety was like coming up for air. I went to group meetings every week where I comfortably talked about my issues. Rebuilding trust with family was a slow-moving vehicle. I wanted them to know sobriety was possible. Setting free the addicted animal in me had left a void. Sobriety freed up a lot of usable hours. I needed a triumph to set the tone for how I was to move forward in life. I uncurled a map of the world in my mind, and fixed my finger down firm on Los Angeles. 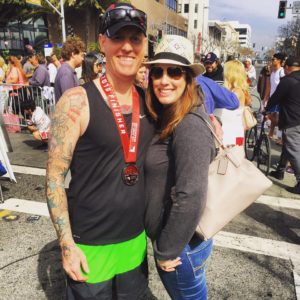 The 2016 Los Angeles Marathon. I showed up excited, nervous and undertrained. On the morning bus from downtown LA to the starting corral at Dodger Stadium, I sat stuffed between great packs of serious-looking runners. An energetic man talked about the course like it was a carnival for kids. When I told him that it was my first marathon, he chuckled, gave me a handshake, and told me to have fun. Over the course of the 26.2-mile adventure, I suffered all the highs and lows.

About four and a half hours later, I appeared in Santa Monica. My parents held up a big yellow sign that read “Cam’s First Marathon.” My wife was carrying our unborn daughter in her belly, and when my eyes caught hers, during the last sprint of the last mile, I covered my face with my hands and wept my way to victory. This race was for family as much as it was for me. I periodically still look at the medal for strength. I turn it around in my hands to remind me of what it takes to be something great. 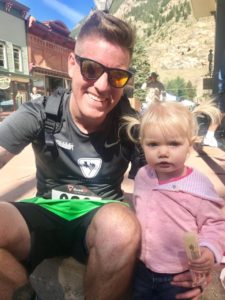 Six months after Los Angeles, my wife and I welcomed our daughter. I was nearly a year into my sobriety, and becoming a dad with clear eyes and a full heart was unforgettable. Having a kid changed my entire outlook on living life. Everything would be for her and I consider her my greatest achievement. When the time is right, I’ll gift my marathon medal to her.

I was in the lobby of a Kansas City hotel when I stumbled across an online post from Runners Roost. It was application for interested runners of all levels to be a part of its 2017 Racing Team. I had just started my path toward recovery, and I felt like the next logical step was to give it a shot.

I applied, was accepted, and I have been growing stronger with the team ever since. It has been extremely instrumental to my recovery. The Roost is a sensational collection of athletes, friends and mentors. We compete and socialize together. We lift each other up and celebrate every run. I credit the Roost Race Team for forever elevating my run, and for hoisting me up into a constant state of mental joy.

When I look back on the darkness I endured as an addict, a calmness sweeps over me. The traffic in my head is gone, and the turbulence is now a focused quiet. I understand that every day won’t be a smooth-sail. The boat will rock. But I’m the one in control of the wheel. I’m through scudding into rough water. The clean and sober man in me now pivots and steers the ship away from the storm, and is guided north into a better and brighter horizon.